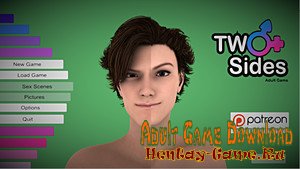 Info: Two Sides is an Adult Game based on a story about a young man who decides to try his luck in a big city. The problem is that in one of his jobs to get money to keep up, he ends up acquiring the ability (or curse) to change his gender, voluntarily or randomly according to his level of masculine or feminine excitement.
The difference of this game is that it focuses on the principles of each player. During the game, the player can decide on the actions of the main character, putting his or her principles, goals and tastes into their decisions, conquering older or younger girls, attempting an incestuous romance, heterosexual, gay or both, and many other things.
The possibilities will be many, and with each update, I will be bringing a series of new events and choices that may lead you to different endings. Along with a rich and flexible story I will also try to bring an immersion in terms of gameplay and interaction, especially in sex scenes.
Possibilities of:
- Start romance with all the girls and boys (interesting) inside the game;
- Call characters for dates;
- Start romance with mother, sister, aunt and cousins;
- Start being straight and / or gay (lesbian);
- To be able to kiss, to fuck, to masturbate, to dominate, to force, to humiliate and to deflorate;

v0.08
Add Scenes
Anny in the Park
Anny and Jenny in the Park
Bret in the Park's Men's Bathroom
Dialogue Bret phone
Dialogue Anny phone
Redone Characters
Policeman Cooper Iray
Ashley Iray
Jenny Iray
Redone Locals
ThePark Area 01 & 02
Add Locales
ThePark Area 03
ThePark Area 04
ThePark Male Bathroom
Discontinued for this version
Scenes of Anny watching television with the protagonist
- It was necessary to withdraw, as it would not have enough content until the arrival of the weekend to occur the event.
Scene with Bret in the Garage
- I removed this scene because I'm going to redo the Garage
Scene with Sierra, after the Grocery Store
- I decided not to spend my days for now.