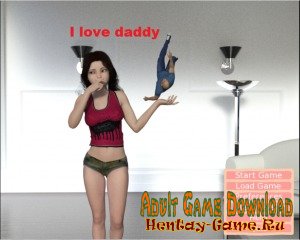 Info: It is a story about a simple girl, who ends up staying in a hotel in Venice with her father for her 18th birthday after her mother bailed out on the romantic getaway that her father planned to try to fix the marriage. In the last night of the trip though, the A/C breaks down and she ends up waking up during the night because of the heat and sweat. Then, by accident or by fate, she sees something she shouldn't have, and when they return home on the next day a new idea hatches in her mind. She has to seduce her daddy.
That's where you come in, you take control of the girl in the hopes of seducing her father, having sex with him and making him as happy as he has made her. Will she be able to sate her lust? What will happen with the marriage? How far are you willing to go for your daddy?

Changelog Version 0.87:
Now the changes:
First the raw numbers. The game now consist of:
1,114 pictures in total, which are divided in
119 events which have
127,628 words written in them.
Spoilers:
Two more endings. This time both were on the family side. This marks the end of that route. One of these divides in two, one in which Bella ends up pregnant and one in which she doesn't. These separate using an obvious choice after you find all memories of the father and you decide to tell the mother that he remembers. The other ending is what happens if you don't find the dad's memories but you still decide to tell your mother that he remembers. Both are, in a way, happy endings. Since this is the end of this route, if there are still any bugs please tell me about them so that I can fix them. I plan to go over the whole script after I'm done, but I'm grateful for the help.
On Catherine's route, there is a little back story about the missing letter, but the most important part is the appearance of a new, but often mentioned, character: The grandmother. This sets the story for the two endings that are missing, which means that next update, should everything work out, will be the last one to add new story. Of course, if there are bugs I will fix them even if I have to release another update in the future, but story wise we are almost done.
I also added two cameos in the story (One on each route) just for fun. They are quite obvious, but I hope you enjoy them.

Download links:
Uploaded
Rapidgator
UploadRocket
Dear visitor, You went to the site as an unregistered user. We recommend You register!
Other news:
|Adult Games Download|Comments: 0||