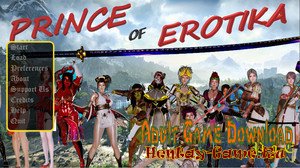 Info: The game begins with the death of King Leonnatos, who was killed by his wife and a evil witch. Before king Leonnatos dies, he made a prophecy. The prophecy was that the dark forces will be defeated by a wizard in a knight's bloodline. You play as a young man who is a son of a knight. Every men in the kingdom became weak except you. You have to learn some wizardry skills and learn some war ethics. But at the same time you can have some fun with every girls in this game.
This game contains around 11 main characters (and two slaves and one witch) with different story lines.
You live with your family ;). You can have many fun with a nice story line and epic background music.