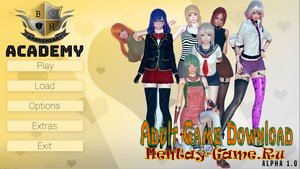 Info: You're a college student enrolling in the prestigious International Braveheart Academy. You're able to pick your starting stats that suit your character the most!
There's also the ability to pick the year you'll be starting, causing you to have different classmates and different homeroom teachers!
Although you can meet every girl in the game even from other classes, the ones from your class will always appear more.
Its core gameplay will be you, the main player interacting with characters to get to know them better.
You'd have regular encounters and those encounters as I said will have questions, answer correctly and that affection with that character will rise faster!
You'll have longer and more meaningful encounters called Special Encounters in which you would have to at least get right more than 50% of the questions.
Then as you grow the relationship by getting to know them, you'll find that Special Encounter! Those feature a sliding puzzle minigame!
You have to complete it under a set amount of time.
These encounters are bigger and have a significant impact relationship wise.
The puzzles would get progressively harder from 3x3 to 4x4 and even 5x5!
The game is going to have stats that you can improve so you can complete puzzles easier and better!

Alpha 1.5 HOTFIX!
Bugfixes:
- Fixed Lyra's game-breaking bug that was causing a crash.
- Cleaned some mistakes on Sophia's last scene.
Alpha 1.5 Patch Notes:
New Gameplay Content!
- Meet N' Yeet has been introduced!
(Its a tinder-like app that will allow for quick sexual interactions sex and service of course best of both worlds!)
[It has a demo of it on the phone you can test it out yourselves]
- Bi-Weekly Polls for girls to be added to Meet N' Yeet will be available for patrons.
(5 girls will be shown, top 2 gets in, the 3rd shows up again on the other poll and the others will be deleted)
Reworked Content!
- Fixed 30 Wobbly Animations from patch 1.3!
(Male & Female Blair and Etna)
New CG Content!
- Etna has 4+ new Encounters!
(New +129 Renders, 35 of them Animations!)
[H content]
- Sophia has 5+ new Encounters!
(New +195 Renders, 56 of them Animations!)
[H content]
- Patreon Content added to the gallery
(New +15 Renders)
(New +5 Animations)
[Has Pogger lewd content.]
Bugfixes:
- Fixed several grammatical issues.
Alpha 1.5 brought +324 new renders and animations, to a total of 2074!