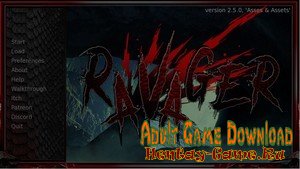 Info: We all know the story: Hero emerges from humble beginnings, slays the tyrannical dragon, and ushers in a new era of peace and prosperity. But here, it's the other way around. Ravager is a game where you play a young dragon, determined to reclaim their birthright. To do so, you will need to build your power, ally with dark forces, evade justice, and whet your bestial appetites. The game currently spans the first three chapters of the story: from your birth to your confrontation with the Regent's huntress. It has a nonlinear plot, with many significant choices to make (and fun to have) along the way.​

v4.3.2
Dev Notes
Our first proper update since Steam launch! This one is big on dynamic scenes, updated art, and other delights.
MVP of this build is Tosk, for finally conquering the engine's limits, and delivering us truly smooth animations.
Features
Performance: Another huge performance improvement - one that should herald the end of the black box forever (Tosk).
Scene: Sabetha & Inej can get the ropes out when they're your consorts. Lucky Sabetha! (collab with Garoompahfah).
Dynamic: Young Malice hangs out with the mercenaries (Dreamweaver request, collab with Mattrex).
Dynamic: Young Malice spends some quality time with her cosmic godmother (Dreamweaver request, collab with Mattrex).
Dynamic: A new consort skit with Sabetha & Inej, exploring their origins (collab with Garoompahfah).
Dynamic: if Malagar appears while Darja is unhappy or gifted to a horde, you will have an opportunity to correct your prior misjudgement.
Dynamic: Issa finds an ancient treasure (collab with Maya Fae and Julia).
Fate: A followup to Marie-Anne's infernal fate (collab with Var and Julia).
Art: Sabetha and Inej split the winnings (Lubbio).
Art: Mina's kobold shift change (Lubbio).
Art: Valzira's egg-laying (Lubbio).
Art: Images for Naho's petrification (adapted from Lubbio).
Art: Issa's character art, maid dress variant (lovestruckbear).
Art: 4MinuteWarning's character art (Irrelevant Art).
Art: Updated character art for Mother (Irrelevant Art).
Art: Updated character art for Eburon (Irrelevant Art).
Art: Emotes for Maelys, new dress variant (Irrelevant Art).
Art: New emotes for Mother and Eburon (Irrelevant Art).
Animation: Rhyll's animated idles (Amon Ra).
Achievements: A whole bunch of new achievements have been added (Tosk).
Tweaks
Roost redecoration scenes will always trigger if you change consort during Act IV. As a side effect, this means they will trigger a second time if you reload midway through an old save.
Asking Marie-Anne for shelter in Act II will allow you to peacefully recruit her in Act III.
Malice's last night will play out differently if Valzira is her mother, or the words of power have not been encountered.
Sprites for Issa, Malagar, Mother, and Zizeryx have been tweaked so that they are in proportion with other characters (Painted artstyle only, for now).
Maelys's animated battle poses have been converted to the more modern 'stripped' state.
Malice can be given a complimentary name when Heloise asks for it.
Chanwe no longer takes her robes off when visiting her at the convent.
All character images are reset to their default state at the start of the character AMA.
Darja's Infernal Fate has been renamed as 'The Dragon Princess'.
Splitting The Winnings and Shift Change have been added to the gallery.
Numerous improvements to visual and audio direction.
Fixes
Translations will revert to English once you reach the end of the work in progress.
You may revert to English manually after picking a translation.
Fixed a rare error that would unlock all achievements.
Sabetha's oral animations are properly proportioned.
It is no longer possible to 'escape' the replay from Valzira's vaginal scene.
Resolved a fringe inconsistency with gifting Heloise to the Infernals before her pregnancy is confirmed.
Broodmother's gallery entry has been fixed and should unlock properly.
Petruk will stop appearing if he is dead.
Petruk's successor will no longer occasionally inherit his name.
Time will pass when capturing Chanwe, Cooch, and Mina.
You will gain Strength if you eat Issa after his encounter with Naho.
You will gain Potency if you pursue the new option with Valzira.
Cooch will remember to visit the beach during your Last Night with her.
Several lines have been split to prevent overlapping the textbox.
And everything found in the playtest! Thank you, playtesters!