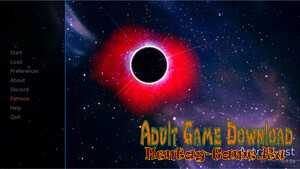 Info: You have awakened in a world you recognize no more, amidst unexplainable darkness and omnipresent madness. Terrifying apocalypse gave birth to monsters whose presence will strip the remains of humanity from the rest of their sanity.
Expand your home, slay eldritch horrors and fight against corruption and madness. Conquer hearts of lovely ladies whose love will be the only ray of hope in the depths of fog. Secrets beyond understanding of mortals await for you to uncover but are you sure you want to find out the truth? Isn't ignorance a bliss?
In this world where even death is only a beginning of your misery, what is good and what is evil? What pulls the strings in this theater of madness? Take a look beyond the veil of reality and find out how ignorant and naive you were!

0.1.5c introduces a lot of qol changes, and fixes. It also adds Grace's bathing.
0.1.5b fixes a lot of smaller things, also adds a new dream, and a side activity for Mina at the evenings.
0.1.5a is a bugfix update.
This release bring about 540 new images, and over 100 new animations. There are many major points in 0.1.5:
Wanderers Hideout can be unlocked
card crafting was implemented with 20 recipes and 2 crafting stations
vault can store cards
25 new items to loot and trade with
significantly reduced grind needed to build stuff
two new expansions for vault
two first wake up scenes
major progression on Mina's story