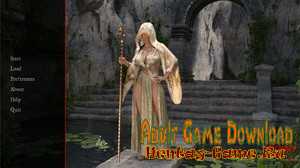 Info: A prince, an escaped prisoner, a usurper, a sexual abuser, a fighter. Karder Dal-Arouya is many things but has one goal in life: to conquer the empire stolen from him by his treacherous queen mother.
Guide Karder on his adventures to reclaim his throne. On his quests you will meet friends and foes, powerful beasts and sexy rulers. Dominate your defeated foes and decide whether you want to use and abuse them for your dark pleasures or convince them to aid you with their skills and knowledge.

v0.1.24
Bugfixes
-No new content
-Round numbers for Gold and Troops
-You can rename your character in the beginning of the game. If you don’t he’ll still be Karder (that’s his real name!!!!11)
-Eviette’s name doesn’t show until she tells it. No additional content for her yet.
-Temple of the First Light counter is reset when leaving the temple (can’t become negative). Also: music doesn’t start whenever you are in the first tile of the temple.
-Fixed a bug where opening a fiefdom popup and then clicking a map icon (for example: Citadel) disabled the popup from reappearing when needed.
-Fixed some over the top expressions in renders in the “merchant family” section
-Turns/Hours counters in Forest/Temple now appears as text on the top left part of the screen and is not affected by random clicks
-Having Angilia in the palace will grant you a Morale boost in the fiefdom (automatic for all wenches in the palace) and slightly more gold if automatic (not forced) Yield succeeds: this is Angilia’s “special power”. You will not see these numbers in the fiefdom screen but they are being calculated behind the scenes.
-Faceless raiders might raid your fiefdoms, attacking your garrisoned forces. Keeping a garrison of over 10 troops is almost an auto win against them. If they win they’ll destroy all your buildings and Obedience will drop by 20 due to your weak leadership. If you repel them (again, a garrison of over 10 troops will do) Obedience will rise by 10 because nobody fucks with Karder.