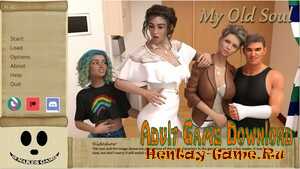 Info: My Old soul is a game that follows the soul of a man who was once a great wizard, but traded his soul (for the first 10,000 years after his death) for his wish to send 80% of all sentient life, including all the other males, to another dimension. After the deal was completed, he immediately died to a heart attack, leaving the world without any men and trapped in a personal hell for thousands of years.
He is finally reborn on Earth in the modern era, and after a car accident, and a lot of experimenting by his gnomish friend from the past, his soul begins to awaken. As his soul jumps through time, he is pulled in two directions, half towards the people he grew up with in the modern era, and half towards the people he is starting to remember from the past (not knowing if his next jump will be his last). And worse, the devil who made the deal with him originally has decided to get him back, one way or another.
Now, he’s left fighting to protect the people he loves, preventing the extinction of human kind, and outwitting a devil with her sights set on owning him permanently.​