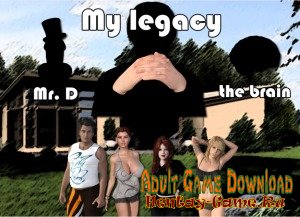 Changelog Version 1.0 Final:
now after 10 months it’s finally done.
- The game has now 28 endings, some slightly different, some complete different. To control that you find every ending there is now a replay room for the endings. Unfortunately the renpy software doesn’t support playing music in replays, so there will be silence.
I also thought about a scene replay room, but the requirements for the different scenes are too complex so i discard it. There would be to much changings in the code needed and it would be most likely that it’ll produce bugs too.
- I also find a bad bug that was the reason some people could’nt play the bath cross-scene and so the harem cross-scene. Because of this bug you could only play the scenes when you’re at a specific scene of Anna on a specific time. When i tested it, i’ll was unaware always at this constellation so i it worked with me everytime.
- I removed some triggers so the most cross-scenes are longer available. With some of them i couldn’t do it because they’re to bond to the story. I marked them better in the new walkthrough.
- As this is my first game that i created i misestimate some path’s with the planned 10 days to play. So it could happen that you’re with some path’s done sooner as the 10 days. You can skip right to the endings then via the skip button. This is also needed if you want to play only one or two of them. (The single endings. If you don’t like the boob monster, for example.)
I tested the game often with many variations and i think i found all the bugs. But i could still oversee some, so i changed the archive structure for the game and seperated the scripts from the images. That means if i have to correct the script you don’t have to download the whole game again, only the much smaller script archive.

Download links:
Uploaded
Rapidgator
Fileboom
Dear visitor, You went to the site as an unregistered user. We recommend You register!
Other news:
|Adult Games Download|Comments: 0||