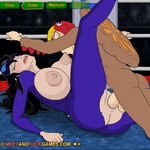 The second part of the game from meetandfuck about the show Boom Taun. One day Baka was handing out leaflets near the supermarket, when suddenly out of nowhere there was a bounty hunter and decided to detain him for the fact that he traveled in time. Baka began to run away from this sexy beauty and came across the mayor and the host of the show Boom Taun. They decided that the conflict between Baka and hunter should be resolved in the ring...

Cheat:
To quickly defeat the opponent, press the space bar.

Game Boom Town! Wrestling 2 (Full Version) can download
Rapidgator
Dear visitor, You went to the site as an unregistered user. We recommend You register!
Other news: