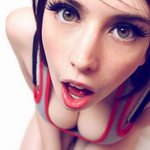 You grew up in a small town, and never really felt like you fitted in there. You spent a lot of time pretty much on your own and found yourself drawn to your computer which offered you a window into the larger world out there.
You childhood years was your neighbour Riley. You would spend a couple hours each night after school together, chatting, bitching and playing console games together. There wasn't much you really kept from each other, and she was always the first person you turned to when your parents would fight.
Eventually however it came to time to head off to college and despite all your plans to go to the same university your specialities just didn't suggest a good place to cater to you both. So you each headed off your separate ways, at first you phoned each other every week, then it was every other week. By the end of the first year you had pretty much stopped talking. You had finally found a group of friends who you felt at home with and started spending more and more time with them.
When it came to vacations you stayed in your college city. Your parents divorced not long after you left, they sold your childhood home and both headed off to opposite sides of the country. The majority of the contact you had with them after that was the money they deposited into you account each month.
It's been a few years now since you graduated and found a job working in IT for a large corporation in the same town you went to college in. And today starts out like pretty much every day since...