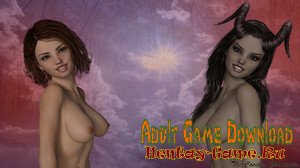 Info: The story starts off in the world of Runda'almare, where a rift has appeared leading to our world. This isn't uncommon, however do to what happened the last time a rift appeared, the El'wen (Fae race of Runda'almare) are choosing to be cautious. You take the role of Tabitha, a not so normal Fae, who's been tasked with scouting the human world, and examining how they have evolved since the last rift. Though something isn't quite right, and the history books may have been lying about the last human world expedition.

v0.15 Beta 01
While I'm calling this a Beta for version .15, I'll likely release this as a large patch next week. This version has no new content, but several fixes and changes to previous content. The change log is fairly long.
Bug Fixes - All Chapters
Fixed several instances where Choices were not raising Tabitha's Attributes.
Fixed several instances where Choices were not highlighted in their respective colors.
Fixed several instances where Guidance rings would turn the wrong color when activated
Fixed several instances where Tabitha could explore beyond a maps boundries.
Bug Fixes - Chapter 1
Fixed Tabitha being visible during the prelude sequence.
Fixed several scenes in Chapter 1 that still used the old colored fonts for dialogue.
Fixed wrong dialogue appearing when picking up Xara's Panties in chapter 1
Fixed the Sage/Fiora Peep scene not removing the overlay or displaying Tabitha's avatar when choosing to leave instead of watch
Bug Fixes - Chapter 2
Fixed the Hole in the Cellar not having a Gold Guidance ring on it.
Fixed Shelly's Avatar appearing when Tabitha talks in some of their conversations
Fixed being able to walk on the Groper's Table in Chapter 2
Fixed the Fourthwall Event on Courtney's Computer in Chapter 2, so Courtney teleports properly.
Fixed switching maps in Chapter 2 after following Becca into the cave from changing night into day.
Fixed a Waitress appearing twice at the same time in Titty City.
Fixed the game freezing when choosing to not share the bed with Courtney in Chapter 2.
Fixed Bruske movement speed during cutscenes.
Fixed Aurora being present in Thrift before going shopping with Courtney
Fixed using Scene Skip during Calen's scene and choosing No Sex from not progressing the storyline
Fixed using Scene Skip during Calen's scene and choosing Threesome from acting as if Tabitha had done it alone.
Fixed - Calen will now Face Fuck Tabitha when choosing the No Way! or Virgin options.
Fixed the Save Update menu appearing when choosing "Agree" When Courtney ask to sleep together in Vurand.
Fixed a menu appearing during the Awakening Ritual scene
Bug Fixes - Chapter 3
Fixed Tabitha being able to exit the Vurand House naked after her ritual.
Fixed night turning back to day when returning from Vurand.
Fixed being able to enter Glamour Shots on night 1 of Chapter 3.
Fixed Courtney's avatar being invisible during her Lingerie sex scene.
Fixed the Quest Log not updating after Courtney's Lingerie scene
Fixed Futa Tabi making an appearance in the Non-Futa Aurora sex scene
Fixed backwards animations in the Groper Threesome scene
Fixed the final kiss with Courtney before Larina's from not appearing on screen.
Fixed the stairs in Larina's Tower
Several fixes to the Trix scene (Non-Futa version)
Fixed the Guards in chapter 3 will no longer freeze in place after Tabitha is caught.
Fixed escaping the castle dungeon sometimes leaving the screen black.
Bug Fixes - Chapter 4
Fixed Losing affection with Keena no matter what choice you made during her bath scene in Eldin
Fixed Kara's initial conversation raising affection with the twins. (Putting the Twinsome Quest in the middle of itself)
Fixed the Sundial in Eldin being usable before they've been introduced
Fixed Xara's tent not having a Pink Guidance ring
Fixed the Scold options on the Feylings from using the wrong line.
Fixed Nyx, Kara, Layla, and Tatia's panty menu's not appearing
Render Fixes
Ch2 Courtney and Calen NonFuta Animation (Frames were backwards)
Ch3 Cashmere Animation Fixed (Wonky Legs)
Ch3 Troy Sex Scene (Renders weren't 1280x960)
Ch4 Futa Glory Hole Animation Fixed (Weird Vagina in animation)
Ch4 Keegan Blowjob Animation fixed (Keegan's Clothes were wonky acting.)
Changes - All Chapters
New Animation System in place. (Give me feedback on it.)
Changes - Chapter 1
Tabitha now requires a Sluttyness of 7 or higher to "wiggle her ass" for the Fae Man when getting the Bucket for the Brothel Peep Scene.
Tabitha now requires a Sluttyness of 10 or higher to "Flash" the Lorianne Stalker
The Brothel Peep scene will now raise Tabitha's Arousal by 10 to 20 points.
Yusara's Peep scene will now raise Tabitha's Arousal by 10 to 20 points
Taler's romance is now initiated by doing any sexual act with him
Removed a romance check for Sage in his Tub Optional scene
Changes - Chapter 2
Sex with Courtney on the first night no longer triggers her romance, however Kissing her in the morning does.
Increased the chance of the Fitness Guy sex scene in Chapter 2 to 50%. (up from 33%)
Tabitha now always agrees to go with Shopping with Courtney.
Changes - Chapter 3
Added a proper transition between Courtney's Lingerie scene and the morning.
Increased the sluttyness needed for the Groper Threesome to 24 to initiate it.
Added 2 more points of sluttyness to Tabitha if she does the DP portion of the Groper Threesome scene.
The final scene of Risque Modeling can now be acivated both before and after entering Larina's Cave in the main quest.
Added Sluttyness and Arousal checks and Gains to the Cashe and Cashmere scenes in the Almare Tavern.
Changes - Chapter 4
Added Sluttyness and Temperament gains to Keena's bath scene
Added Romance, Sluttyness and Temperament gains to Keegan's reward scene.
Added Romance, Sluttyness, and Temperament gains to Sage's reunion scene
Changed the Choices slightly in the Sage Reunion scene
Removed the fourthwall break on the Tavern Stairs in Eldin (Obviously I've put the stairs in since the .14 beta)
Added a backdrop to the conversations and scenes with Nyx
Tabitha can now enter Sages room on morning of Day 2 of Chapter 4 to initiate his sex scene, if done before meeting with Yusara in the market place.
Keegan will now appear at the supply tent at night, if the Twinsome quest is active and he has not been spoken with yet.

The Scene Replays do not have the new Animation System yet and will Freeze the game when used. So do not use them with this beta.