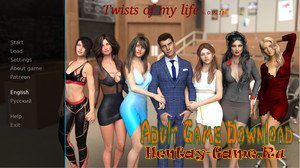 Info: So what is the game about?
You are student of a law school in the city “N”.
You live a normal life, study, meet different people and etc.
In short, you do what most people of your age do.
At a certain moment you get yourself into problems which cause the need to move and so the story begins.
I work hard on personality of characters and emotional part of relationships between people.
Sexual life of main character hasn`t been left behind as well. All the scenes are written in a vivid, vivacious manner and strengthened by a good graphics.
You will meet different characters in the game.
I try to make everyone special with own personality, habits, not just different models of DAZ.

v1.0
- Irene's ending added
- Several bugs fixed
v0.99
- 4 characters (Alanna, Helga Helena and Ann) received a conclusion to their story.
- 10 new endings were added to those that are already in the game (Irene’s endings are yet to be added)
- The update adds 560 new renders, 10 animated scenes and 19800 words.
- The current total amount of words: 137830 words. 3180 renders,
- Endings with three different characters (Alanna, Helga, Helena) each of which has approximately the same amount of content.The Ann’s ending is bigger than the rest of them only because it has two mutually exclusive branches.
1) Helga – 3 endings;
2) Helena – 2 endings;
3) Alanna – 1 ending (bad endings where she dumps MC were implemented earlier in the game);
4) Ann – 4 endings;
Disclaimer. You will not find a walkthrough for the 1.0 update since there’s no need for it. The ending is a result of your previous choices.
The build's number is 0.99 only for convenience of the developers. Once we're ready to roll out finished final update, it will be called 1.0
Attention: 1) Do not use saves made during animations, you won't be able to use them later 2) If you have a working save created earlier in the game, it will be fully compatible. If you see error messages or crashes, use a different save. No need to start a new game.