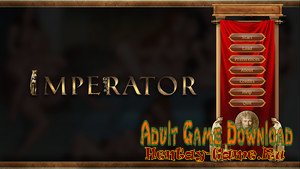 Info: From the Dev Team: Hi, and welcome to the first dev test release of Imperator. This is a very rough release, and we know that there are bugs, issues, problems, explosions, fiery loss of boner issues, etc. Don't Panic! Better releases are on their way.
Imperator is a slave training game set in ancient Rome. It's a straight historical setting without fantasy elements.
Gameplay:
There are a couple of new or different mechanisms in this game. The first is the day planner. In the upper left corner of the screen you will see a Star/Sun or a Moon. If you click on this you can schedule activities. Right now there are only basic travel activities, but more content is coming, stay tuned. Also new to the genre is that each character has some stats that are not immediately visible. For example, the player will have no direct way of seeing the protagonists Inclicio statistic. This is on purpose. Sometimes, you will also see menus change in weird ways including additional information on the character you're talking to. When this happens it means you've successfully made an insight roll. Don't Panic.
Training Slaves:
You will have to take the slave (Fasti) to the bedroom and attempt training in order to unlock content. If you fail, you can punish her. Use the 1,2,3 keys and the left -right arrow keys to switch up how you are beating her. Keep it in the green. Also, don't do this too much.
Content:
The alpha content ends once you have the bordello running. That's the alpha. We hope you enjoy it. Right now, only massage, bathing, and hand job unlock in alpha. Other sex acts unlock in next version(s)
Note: This version allows rollback and debug. Both of those were intentionally designed around, and will break the game.