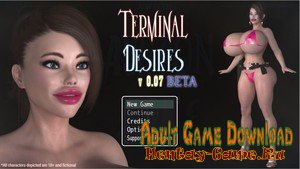 Info: Terminal Desires is an erotic, zombie themed, role playing game made with RPG Maker MV. Set in a fictional version of Earth where incredibly skimpy outfits and huge proportions are the norm. Control police officer Tiffany Neil as she and her partner investigate a mysterious distress signal from the small, secluded town of 'Ashton Lake' and uncover the horrors within.
Explore the town, face fearsome enemies in combat, make important story defining decisions and sexual choices. Will she submit to her every desire? Or will she resist and uncover the shocking truth hidden deep within the town's walls? Her fate, along with the town's is yours to decide...
There will be a number of fetishes, some optional, but the main focus initially will be on huge endowments, monsters/creatures and impregnation. Plus more as interesting ideas that fit the theme are requested/suggested by patrons.

v0.10 Alpha 2
The main selling point of this build is of course the 5 new combat sex scenes for Debra & the updated ending for the Deb vs Jeb scene (though that's still only accessible through the Gallery for now). However, if you can stomach waiting longer for some more content, I am targeting Early July for ALPHA #3 which aims to focus on adding new sex scenes rather than gameplay features.
Of course, I'd still recommend that the majority of players continue to wait for the Full Release where their saves will then carry over to v0.11+. But there's still a decent chunk of stuff left to do before we'll be at that point, so it's up to you whether you try out these pre-release builds or not.
Regardless, I appreciate any feedback/suggestions you've got regarding the new gameplay systems or any additional bugs that you discover. :)
~ Jim
Known Bugs/Issues:
Malwarebytes appears to throw a false positive over the game's executable. You may have to whitelist "Game.exe" if your security software decides to quarantine it.
You may encounter a crash with no error message on Day 3. Usually before one of the unique story fights. I have yet to be able to diagnose this crash as it is difficult for me to replicate on my system. Please contact me with specifics if you encounter this crash. If you can replicate it 100% of the time, it would help me if you could upload your save file for me to analyze.
When "Autosave on Map Load" is enabled, the act of loading any save file will often cause a new Autosave to be made in one of the 3 designated slots.
Bonuses associated with Skill Ranks are not yet all implemented or working as advertised.
3 Perks are currently not functioning. They have been marked in RED text.
There are additional issues with the following Perks:
[By A Thread] - Since the planned Undress/Dress system is not in this ALPHA, the Perk currently gives a 25% chance to refund an Outfit Repair Kit when using one.
[Sticky Loads] - The "Gun Jamming" mechanic has not yet been implemented.
A visual bug where the new "Item Found!" popup notifications can frequently overlap when looting multiple items at once from containers.
When fighting with a companion, there is a chance that an enemy will accidentally attempt to strip a girl who is already naked.
Currently, the only way to access the Stat Allocation & Perk Selection screens in on Level-Up.
The 9mm Idle "Shocked Expression" Dialogue CG is missing 5 variants for Tiffany's Day 3 bodies. The unarmed variants are currently in use as placeholder.
The dreaded "HP Bug", where Tiffany's Health is not at Max HP despite taking no damage, may be back due to the new Level-Up features that have yet to be taken into consideration.
When first entering the Casino, Terry's Flashlight beam has a tendency to lag behind his current position when he starts to move.
The "PROGRESS" statistic may not correctly add up to 100% even if completing every current piece of content possible.