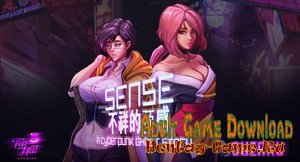 nfo: In 2083 Neo Hong Kong, a young woman named Mei Lin Mak is dragged into a maelstrom of supernatural horror. As she peers deeper into the century old mystery, Mei will be forced to question her perception of reality and her trust of her cybernetic eyes. Under the neon lights of a cyperpunk dystopia, the ruins of the 'Chong Sing Apartments' hides a bloody mystery illuminated by both the traditions of Chinese folklore and the innovations of the industrial future. If there is any hope of escaping this nightmare, Mei-Lin must explore this complex, piecing together the stories of 14 lost souls, and discover the truth of her own family curse.

Sense - 不祥的预感: A Cyberpunk Ghost Story is a 2.5D game inspired by Clock Tower and Fatal Frame. With careful attention to pacing, atmosphere and storytelling, Sense hopes to return the horror genre to its roots; celebrating the slow, fearful creep of dread instead of relying on over the top action and jump scares. The ghosts - as glitches on our reality - act as spiritual and paranormal threats, not monsters to be killed. The horror of our story comes from atmosphere and storytelling, not loud sound and artificial effects.

v1.1
CHANGES
- Adjusted the difficulty and interaction on the “elevator” sequence in the lobby.
- Added 14 autosave/checkpoint spots throughout the game
- Added an unlimited “Quicksave” function to the pause menu, allowing players to save at any time, Unless in the same room as a ghost, or during specific events.
- Due to the complexity and length of the game, utilizing this feature MAY cause unintended visual bugs or errors related to flag based animations or interactions. It may also cause progression bugs, so we highly recommend saving manually at save stations as well.
- Added a function to NG+ , which removes the quick save option for added challenge “Hard mode”
- Added a function to NG++, which removes both autosaving and quick saving, for the “survival horror” mode. Only manual/limited saving is available in New Game ++.
- Switched the A and B button functions on XBOX controllers
- Added A Journal item unlocked at start of game which has helpful “tutorial” notes on saving, the PDA, and the Taomu.
- Improved the visibility of Several ghosts in the later portions of the game.
- Removed “logic chain” conditions on several items so that they may be picked up right away, eliminating the more frustrating backtracking. (Note: this was only done on SOME items, not all of them in game)
- Added visual prompts to the “balance board” Minigame/puzzle on the 2nd floor.
- Changed the pause menu to ESC on PC, instead of enter. controller button is unchanged.
- Changed the interactions for the “boiling water” and “melting lead” interactions. The player must now pick up the items from the stoves, instead of automatically receive them. Also reduced the wait times on these interactions.
FIXES
- Fixed a bug in which Flags were not properly resetting when starting NG+, breaking NG+ only interactions and some events.
- This effected the elevator in the lobby as well and has been fixed
- Fixed some localization errors
- The “how to play” screen now displays in the correct language, as selected by the player.
- several typos and broken color tags have been corrected throughout the game and journals/flavor text
- Fixed a bug with a certain ghost’s attack, in which a dialogue box would appear and freeze the game.
- Fixed a bug in NG++ in which a certain ghost would become invincible.
- fixed a bug in which text was not displaying properly on choice buttons
- Fixed a bug in which certain ghosts AI did not properly respond when changing scenes.
- Fixed a bug in which the QTE buttons were not perusable on KBM if a controller was plugged in
- Fixed a bug in which the camera was moving from out of bounds on scene loading.
- Fixed a bug in which the secret NG++ ending would not run.
NOTE: For build stability, you should delete any save files from the previous build and start a new game. Continuing a save from the 1.0 build will bug several interactions and possibly prevent you from beating the game.