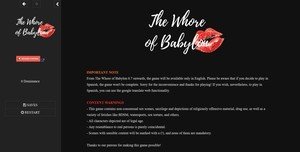 Info: In this story, you will play as a nun who's lived her whole life in a convent and, consequently is sexually repressed (hopefully not for long). Nevertheless, a penance involving the book of Revelation and the Whore of Babylon will pique her interest, taking her down the path of submission and obedience, or domination and vengeance. It's your choice!

Version 1.2:
New content:
- Rebel's path ending: defeat your nemesis, uncover the true identity of Father Martín!
- Added final battle
- Added epilogue for Demon Queen ending
- Added a whole shitton of new images and gifs for the dungeon
- Finally get your hands on Ben's juicy body (and his wife too, if you want to!)
- You can remodel the convent, Dungeon and the Brothel to make them fancier and unlock a new wing in the Dungeon
- Discover the Ancient book of Spells and partake in more fun demonic rituals! (9 rituals to discover as well as an Easter Egg relating to the "Ascension" ritual)
- Spy on Helen in her room to steal the book of spells
- Recover energy by partying with your nuns after remodelling the dungeon
- New things to buy in Ben's shop
- Added a new avatar from Incase's "The Invitation"
Fixes and changes
- Base energy increased to 6
- Energy from drinking coffee increased to 2
- Father Martín now comes every week and tithes you a small amount of money
- Added treasure hoard rewards for defeating Papa Slick and Father Martín
- Stamina now correctly regenerates every week for your girls in the brothel
- Changed picture for the town
- Fixed Dungeon interaction with Mother Superior
- Fixed initiating revenge against Papa Slick
- Typos and small bug fixes
- Fixed descriptions for final battle against Father
- Fixed inventory not working with the new avatar system
- Fixed revenge against Papa Slick not triggering under certain conditions