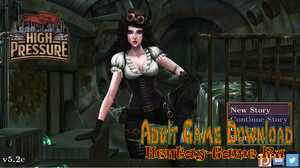 Info: High Pressure is an adult RPG game built in RPGMaker MV where decisions matter.
Depending on your choices Adelina will be able to remain pure or fall into lustful wanton. Keep her loyalty to the Empire, side with the Rebels or simply remain impartial as a true journalist. Earn fame and claim her prize in the contest or fade into obscurity.
The decisions you take will change what Adelina is willing to do. Such as changing her clothing or being more willing to engage in lewd activities.
Story:
Adelina Steinmeyer is heir to a small noble house that has fallen on hard times. Working as a journalist for the “Small Times” an independent publishing house in the capital of the Endar Empire.
Opportunity knocks at her door as the head of the office intends to retire, offering her a chance to inherit the newspapers by taking part in a contest.
With the winds of rebellions and dissatisfaction brewing in the distant colonies of the empire. She must travel to the regions of conflict and write the best stories she can in hopes of earning her prize and restoring her house to its former glory.
Her missions is easier said than done. The pressure to censor the events in favor of the Empire. The potential to use her writing to rally the Rebels. Or remain truly impartial and report the events as they happen. And adding to her troubles a string of robberies in the colony leave her with just the clothes on her back.
Which road will she walk? What will she be willing to do in order to claim her prize? And what misadventures await her?

v6.1b
NEW:
- 1 new client in monocle
With event on more than 8000 words, and a lot of options (Alice did amazing job).
You can find him in far right part near bar counter in Monocle.
- "Deviant reactions" system was expanded with 25 new reactions
All of them has usage in event with new client.
- 1 new picture made by amazing artist Sunkeytail
It shouldn't be in game, since this picture was our test work to see if we can work together, but it was so amazing, that I decide to placed it in game in 1 small scene where it should be (One of routes with guy near dance floor). Also it will be added in "Bonus" folder.
- Added plugin that add shadows near light sources.
Please tell me do You like this feature.
- Added hint about new client it's in same place where "reset event" located.
Updated:
- "Deviant reactions" was optimized and made a little more human-friendly with minor tweaks
On this I also need Your feedbacks.
-Added option to chose between "Monocle" and "Main story".