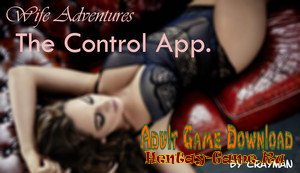 Info: Wife Adventures - The Control App is an adult interactive game which follows the life of a married man (you) who comes across a life-changing phone app, granting him with far too much power over his wife. It's up to you how you use it.
This adult game heavily focuses on Mind Control and Cuckoldry. These are the more common themes throughout the storytelling in Control App, skewing as you branch down different paths. It's intended that immersion is utmost, however beware that this game isn't for everyone. There are no good endings (for now).

V0.4 CHANGELOG:
Game now being built off Visual Studio Code.
New Graphic UI Interface, which improved player friendliness.
Updated the Control App to be more user friendly. You can now track wife's progress.
Included a quest tracking system to notify you of what you need to do next to progress a route.
Updated wife description and images when interacting with her, depending on the path.
Updated more variation in wife's response when you ask her how she's feeling.
images and references to the directory are now lowercase without spaces, to improve compatibility with other OS's.
Wife's liberty stats now start from 5, which is the base middle (within a range of 0-10).
Additional Scenes;
Model Path - Naive (2 sex scenes)
Model Path - Dom (2 sex scenes)
Model Path - Hot (2 sex scenes)
Model Path - Sub (3 sex scenes)
Model Path - Pornstar (2 sex scenes)
Bug Fix - Prevented from progressing the debt path. Couldn't ask wife to get a job.
Bug Fixes - time progressed incorrectly within some passages, resulting in sometimes missing key day-specific early events.
Bug Fix - Hot Wife sequence was incorrect with the modelling path, which prevented progress.
Bug Fix - Dialogue Loop with Stepdad.
Bug Fix - Prevented from progressing the student path.
Bug Fix - Prevented from progressing the neighbour path due to a doubled variable, which forced you to progress too far.
Bug Fix - Fixed a loop bug at the end of content passage in the model sub wife path which prevented the player from progressing.
Bug Fix - Fixed a typo in a variable which prevented progress in the step-dad sub wife path.
Bug Fix - Fixed a day-tracking event which prevented the debt path from triggering.
Bug Fixes - Countless typos, broken html (which resulted in bright yellow text), missing images, and mistyped names.