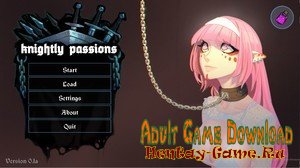 Info: What could be better than the good old adventures of a brave hunter in the harsh world of the middle ages?
Of course, adventures in the world of magic! Terrible monsters, evil sorcerers, cruel lords, mean mercenaries - this is only a small part of what our main character will face, who went in search of his sister.
On his way he will find devious traps, deep dungeons full of treasures, mysterious palaces with adventurous princesses, huts of lustful witches, ancient ruins hidden by a cover of magic and much more. Will he manage to find faithful friends and comrades in this world? Will a simple hunter be able to find powerful weapons and artifacts, to rise to heights unknown even to glorious knights? And will he have the strength to resist the devil's strongest weapon - temptation? All this and more you will find in game 'Knightly Passions'.

v0.9a
The main quest has received an expansion! You can now get a few steps closer to finding your sister.
New quest: “A Liberating Outfit.” This is the final quest in the elf’s plotline, which smoothly segues into her adult content.
New quest: “The Young Warrior.” In this quest, you’ll be able to help the peasant boy recover his stolen toy.
Two new characters make their first appearances in the game: the Governor and the Vampire.
Added a new location: The Vampire’s House
Added two minigames: “Chase for Prey” and “Last Stick.” You’ll encounter the first one in the main quest, while the second can be found in “The Young Warrior” quest.
Improved the witch’s 18+ animations in Quest 3 (Live2D).
Improved the elf’s “Doggy Style” 18+ animations (Live2D).
The combat system has been completely rewritten and enhanced. You can expect to see more new cards, enemies, abilities, buffs, and debuffs in future updates.
Updated the design of the battle interface.
Improved critical hit mechanics. The player can now make the hunter deal triple damage by hitting a button at the appropriate time.
Updated the algorithm for auto-battles in hunting mode. The damage caused by auto-battles now adjusts based on the number of enemies and the hunter’s damage.
If the hunter hunts in the forest during Quest 15, he can now encounter the elf’s mother.
Added fishing training.
The difficulty of catching fish now scales based on your level of Hunting Instinct. If your Hunting Instinct level is above 20, then the difficulty of fishing is trivial.
Simplified catching an Icarius in Quest 17.
Fishing is no longer available in the evening or at night.
Updated arm wrestling. Bonuses and traps in the minigame have been enhanced. Before the start of an arm-wrestling bout, your opponent’s difficulty level is now shown. In the same window, you can also receive arm-wrestling training.
Updated the pause menu. We’ve implemented “Main Menu” and “Exit” buttons, which allow you to go to the game’s main menu or exit the game entirely, respectively.
Added some new NPC dialogues.
Added more options in some existing quests.
Improved the English translation.
Improved quest streamlining.
Updated the game’s exit screen.
Added new dialogue option icons.
Fixed a rare bug that broke the navigation screen at the end of the game.
Fixed a bug with prices in the tavern after the bartender sobers up.
Also fixed many other bugs, and probably added some new ones.
And much more!