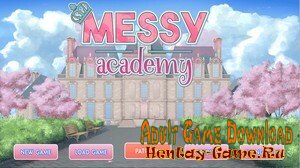 Info: Messy Academy is an 18+ adult/porn visual novel that focuses on diapers! It's a general school life, slice of life feeling series that not only focuses on the adult related content. But it contains comedy, drama and romance as well! There is excellent world and character building going on in the game.
You play as Brandon Wilkins, a 20-year-old decently geeky guy who is tired of being a virgin. Unsure yet if he simply wishes to get laid, or find a girlfriend, he begins his search online, and comes across an interesting webpage for one. Kaikaku Academy, an all-girls private college campus.
Briefly fantasizing what it would be like to be the only guy in a school full of women, the reality that they'd never let him through the gates, let alone enroll there, leaves Brandon feeling crestfallen. Before he closes the webpage, he notices it isn't a well-secured website, and begins digging around. Not only does he uncover a loophole in their security protocols, but also in their enrollment contract. He decides to put down his name, along with those of his two buddies, onto the transfer list. What did he have to lose, after all?
Weeks passed with no word, and he almost forgot about it entirely, when a letter arrived notifying Brandon of his acceptance of transfer into the academy. He quickly confirmed his friends had received their acceptance letters as well, and they shared daydreams of the possibilities awaiting them in an academy filled with girls.
The boys excitedly arrive on their first day of school, their thoughts already filled with chasing after the girls and getting to have the school all to themselves. But their little celebration is short lived after they meet John, one of the teachers at the school, who introduces them to the rules. The main one being that in order to attend Kaikaku Academy, students must wear diapers at all times, and to make matters worse, access to restrooms is forbidden.
After a tough decision, they all agree and accept the academy's conditions. Being the only boys in an all-girls school is too great a temptation for them to pass up. But will they survive the punishments? Can they figure out how the school keeps this all a secret from the public? Will their goal of getting girlfriends even be possible when they're all wearing diapers?

[IMPORTANT: Saved data from Version 0.15+ should work across newer versions of the game released to continue from where you left off.]