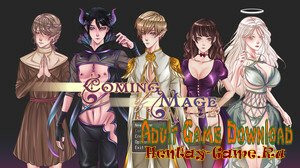 Info: Coming of Mage is an adult fantasy RPG game taking place in the Celestial Tide universe, a world where celestial magic flows between numerous planes of existence and fills living creatures with its vital energy.
Join Nineal, an elf mage apprentice, on his journey to become a certified sorcerer. Meet Veronica, a manipulative daughter of a Taurean's nobleman, Amiran, a very handsome incubus, lsafiele, a shy angel, and Kayle, a cleric from the Taurean temple. Complete various quests to help the city of Taurea deal with its arising problems, and train to become more powerful by expanding your own magic powers. Get very personal with Nineal's closest friends, but also with other Taurean citizens — after all, no one knows whose help you might need one day, especially as a student of one of the most unpredictable — and dangerous — sorcerers in the kingdom.

Warning this game has 2 routes: Male on Female and Second Route, either is optional just choose the one you want at the start of the game