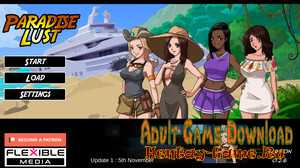 [center]
Info: Paradise Lust is a visual novel and erotic dating sim, interspersed with simple subgames.
The game follows the story of the wreck of the Moby Dick; a pleasure yacht chartered by the Miss World Media pageant for a luxury promo cruise in the South Pacific. You play the role of the bartender of the vessel, washed up on the shore of idyllic Tuvatuva Island along with a cast of beautiful beauty pageant contestants and their friends. There you will sort out how to survive and thrive on the island while searching for other survivors, including your brother, who was captain of the vessel.​