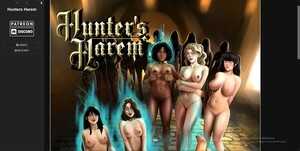 [center]Info: Hunter one day receives a package from his dead uncle. In there he finds a mysterious book of magic spells, the first of which allows him to magically hypnotize and enslave the people around him. In further studies of the book, he will discover a way to change the people around him even more, including their gender. He will encounter mysterious figures and learn dangerous secrets about a mad medieval wizard, his dead uncle, and his presumably dead father.​

v0.4.4a
fixed the broken journal entries
v0.4.4
* Added the option to ask for Lisas keys
* Added the option to ask Brenda to stop camming
* Added functions to npcs (isHorny, isObedient, isSlave, isFuckable, isKnown)
* Added functions to locations (isClosed, hasKey, isKnown)
* Dynamically generate temporary variables for npcs and locations.
* Added a speechbubble that appears in the characterportraits when they have a possible event. By clicking on it you open a window, where they will give you a hint of where the event will happen.
* Written a call macro that makes writing a call much easier. The container is Text messages are initialized by , whereby args is the sender. The text of the message follows after the closed brackets. Images are started by , whereby args is the sender. The image path is written after the closed brackets.
* The ride sidebar is now scrollable if too many people are present and should be fixed to the correct height for each screen resolution. The movement menu should always appear on the bottom and never scroll out of frame.
* Removed the move menu shortcut option
* Added Henrietta gaming event
* Added Henrietta gym machine event
* Added a workslate timetable
* Implemented the motel (motel_outside, motel_inside, broom closet and Victorias Room)
* Added a new npc Kathrin (Chloe Couture), who works at the motel.
* Added the intro event for Kathrin.
* Added a story relevant event for searching Victorias motel room.
* You can now only phone npcs you have the number of. If they hate you, they will not react to your calls.
* Added give number talk options for Brenda, Christina and Lucy.
* Added a button in the left menu to go to the tutorial from everywhere.
* Deleted the tutorial option in your bedroom.
* Added a series of buttons to the start page to activate/deactivate cheats,handwritten font and animations in speech boxes, added the same buttons in the options menu.
* Added Victories diary (image and text)
* Changed quest items from story variables to setup variables that are stored in the inventory.
* Shifted hints and tips from the journal to the tutorial area.
* Added a way to activate the cheats while playing. The link is somewhere in the tutorial area.
* Wrote Brendas journal entries
* Wrote more journal entries for Victoria.
* Wrote Kathrins enchant menu
* Detailed Brendas talk denials more, so she only invites you, once she has first confronted you.
* Changed