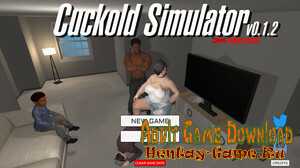 Features
Work your job at GloboCorp to make money
You can give all your hard-earned money to the bull
Browse your favorite websites, such as Reddit™
Your fat wife will verbally abuse you
Become emotionally attached to children that are not biologically yours
Collect 'Funky Pop' collectibles that are hidden across the world
Play actual games on your 'Wintendo Snitch' gaming console, such as 'Cuck Souls'
And more!

v0.1.9
So, full disclosure: I took a lot of lazy shortcuts when initially making the game because I never expected it to be as successful as it has been. It's taken some time to fix that up. The game obviously has had some performance related issues that
currently
aren't too bad, but bad enough that I can't add new content until I fix them... Because the game will eventually grind to a halt on average hardware.
This patch
should
resolve that, and provide a base that's somewhat scalable. So if this all works out, the next patch will be new content. Resource loading has been completely overhauled, so the game should run better on low-end computers and, in general, have less crashes. As a downside, you may experience a slight loading time when transitioning zones now. Oh well.
New Stuff
New achievement added: 跑酷
Resource loading has been completely overhauled.
Pressing hotkeys will no longer interrupt your Reddit™ browsing experience.
Various grammatical/spelling fixes.
Various dialog changes.
Controller support should be better in Cuck Souls (only tested with 360 controller)
Other New Stuff (nothing major, but will only appear in a new save)
Deshawn will no longer menacingly stand inside the couch.
Dialog added to DeShawn after his prank.
Music will no longer continually fade out after Night 7.
Bedroom dialog on Day 8.
Known issue: If you logged out inside GameStart, you will now be falling into the void. It should teleport you back to the house after some time. Go grab a drink while you wait. All other areas should be fine.
Not a bug: 'Magic Rune Explosions' in Cuck Souls blocking bullets, I've decided I like this as it adds a needed disadvantage to being at a very far range.