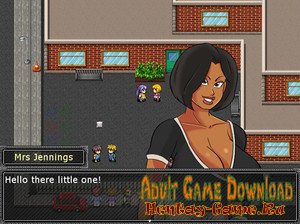 Info: Urban Demons, a tale of two souls lost in the darkness. Take control of two characters, Peter the perverted young male and Neala the dominating female as you journey around the city seeking to complete your goals.

For Peter it is simple, finding as many busty women as possible and convincing them to do whatever you desire. For Neala, revenge is a dish she wishes to serve and she will do anything to make sure that vengeance will be delivered against those who do her wrong.
These goals become slightly easier when you are blessed by demonic forces. But are these powers there to merely help you? Or are there more sinister motives at hand?

Changelog 0.9 Beta 2
* Moved Starting location to correct place
* Mrs Jennings now shouts that older characters SHOULDN’T BE INTERACTED WITH
* Mrs Jennings now gives the demon powers at the start (instead of the hexagram)
* Mrs Jennings Pre Level 3 dialogue at the bar no longer breaks the game
* Mrs Jennings can now be asked “What do you like to do?” giving you hints on where to look for her during the week
* Fixed a bug where if the first HJ attempt fails (didn’t have all dialogue on non-quick progress mode, or failed the mini game) future attempts would fail
* If you are playing non-quick progression, you will no longer have to play the mini game if you haven’t unlocked all the dialogue. Instead it will fail before hand and warn you you need to unlock more.
* Fixed a bug where the persuade mini game would sometimes crash due to going from 10 or above to below 10.
* Can no longer take Mrs Jennings causing some players to get stuck
* If interacting with Mrs Jennings at night while she sleeps, she will respond properly (unlikely as key has been removed)
* Mr Jennings is no longer too drunk that he calls you “n[1]” in the bar
* Game no longer freezes at comic book store with a progression level of 4
* Peter no longer has a brain fart and says “Hi [Own Character name]!” when speaking to Mrs Jennings in the store
* HJ build up no longer fires mini game (check) twice if failed the first time
* Reduced progression popup sounds
* Fixed the journal so it correctly displays non-quick progression dialogue requirement
* BM route now does not get blocked when playing on Long Progression
* Fixed the weird transition around the TF and detention work
* Added a dialogue selector in the debug area. Can play any dialogue, at any level, in any variant – this will form the pre-cursor of the new memory room
* Loads of bug fixes (too many to list)
Also because I realised I hadn’t officially stated before, here is a check list of everything to do in 0.9:
Scenes/events:
* Gym outfit
* Changing in changing rooms
* HJ
* TF
* BJ
* Store TF
* School Toilet Ride/ Storeroom Fuck
* Park Toilet Ride / Outside Fuck
* Bar Toilet Ride * Mrs Jennings Home BJ
* Mrs Jennings Home Fuck
* Sex Ed Fuck
* Mrs Jennings Cosplay Coding/Graphical
* New Journal System
* New Progression UI/System
* New persuade mini game
* New Investment System (comic book currently only)
* New Text Message System (code change only)
* New Animation Player (code change only)