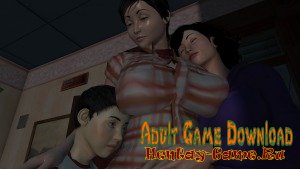 Info: It's about a mother called Rachel, living in a city under siege, in a semi-apocalyptic universe.
The country is in war, her husband left home to fight for the country and never came back.
Now she has to take care of her son, Michael, and her daughter Lauren and live trough this apocalypse.

- Fixed 'Load a game' UI
- New scene with Lauren & Michael at the kitchen.
- Additional diary entries for Lauren.
- New scene with Rachel & Michael at the kitchen.
- 2 Scenes of Michael & Rachel at night (In bed)
- 31 NEW ANIMATIONS!
- Condoms could be bought from Susan at 'The Hub'
- Could now get your reward from Joe (After completing his mission at The Bridge).
- Misc fixes & Adjustments.