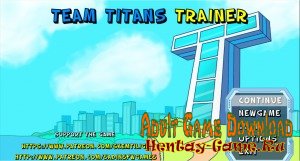 Game Mechanics
The game thus far has a training mini-game, and dialogue system which has been built from the ground up, so you the fans can suggest new features to add to it. The game also has an X-Ray vision feature allowing you to see through…. stuff.
But that’s just the tip of the ice burg. We also plan to add other features like, A fighting mini-game (Probably a twist on the cookie clicker games) which allows you to fight crime and make a little money, a shop system where you can buy gifts, costumes, and other items for Starfire, an explorable tower where you might find hidden costumes and items, and a day and night system.

What makes your game so special?
Unlike most trainer games, which use Renpy or RPG Maker, Team Titans Trainer uses Game Maker Studio. Although there are plenty of games out that use those other engines, We find that most developers don’t bother (or have time) to add to the engine. But by using Game Maker Studio we are able (and capable) to give the fans a more enriching experience, by breaking the mold and creating something familiar, yet unique.