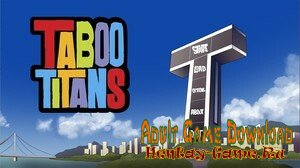 Info: Taboo Titans is an adult dating sim/visual novel that parodies the Teen Titans universe. You play as a superpowered physical trainer, and it's your job to make sure that Raven and Starfire stay in shape to fight crime. Give them special care during their massages, but be sure not to wear them out!​