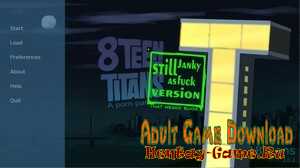 Info: The Teen Titans are young superheroes fighting crime under leadership of Robin,
Unknown to the other Titans, Their team leader Robin was abducted by Slade, one of their most dangerous enemies
After restraining him, Slade take a syringe and inject something into Robins veins accompanied by a cryptic message​.

18Titans 1.0.9 - Bughunt
Hey all! It's been a while since 18Titans was on the menu, but Raven is finally getting her date and Terra is also getting something... A new forceful female character will make her appearance as well as other stuff, but I'll write up a slightly more detailed description below. Let's have some links first!
This build is pretty much as far as I managed to get this month(while still being late) and there will be a moment where you might lament that fact. You'll be fighting an enemy and won't be able to claim your prize for winning that fight. That's not a bug. I just didn't make it that far.
As always, if you find any sort of bug or other things you'd like to bring to my attention, you can write a comment below or send me a dm. Both are equally helpful and appreciated!
- Spoiler log -
Now for the spoilers. Jinx will have a new scene if you captured her and finished the earlier scenes at least once. This will eventually end up in a scene with three dicks(if you've seen Cyborg's nightly visitor ) and one Jinx. Those three holes in the glass wall weren't a coinky-dinky! Her resistance will be lowered to 10 afterwards.
Blackfire DOES NOT have a new scene, but her resistance will be lowered to 10 if you ejaculate inside of her in this version. That will be important for future versions.
A new character will be introduced, called Pantha. Winning from her in a match will yield a reward in the form of a vaginal scene with her. She'll teach you a new move which currently(?) only applies when fighting her.
Terra will spread her legs. At first just to receive coconut milk on the outside. In a later scene you get to choose where.
Raven will get her date and the mc will get a blow/licky job.
After Raven's new scene, and going to bed, you'll get a call from Kitten and can use the telescope to fight a new enemy the next day. This is the fight where you can't claim your prize if you win.
You'll fight a new mysterious enemy!
And that's about it for this version.
Like I said, whatever feedback you have, I'll gladly receive/read it and hopefully use it to make a better version in the future. Thanks and I hope you'll like this version's new additions.
ps. I'll start putting together a new FET art assets update now which will have scenes from FET's last update.