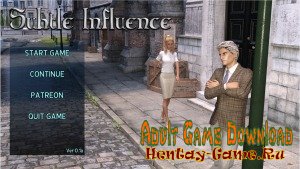 Gameplay
Subtle Influence is a game revolving around the corruption / mind control genre. It is a simple point-and-click adventure game driven by dialogue and story elements with slight role-playing mechanics infused in. There are different locations to travel to, characters to meet and interact at various times of day and activities that you can perform.
The Power of Influence comes in the form of the Corrupt feature. Use this on any of the female characters that you meet. Every time corruption is performed, the affected character gains 10 corruption points. Accumulate enough points (up to a maximum of 100) and you will be able to trigger erotic scenes and other events. Certain interactions and activities are based off your character stats, meaning they cannot be performed until you meet the minimum requirements.
There is a general storyline that you can follow, however choices that you make throughout the game will determine the type of ending you will receive as a result.

Changelog v0.15:
General
– You should now be able to Save / Load / Rollback properly.
– You should now be able to make adjustments to text flow.
– The menu icon should now be working properly.
– Replaced the font set.
– Reworked the stats bar.
– Reworked the transition effects.
– Reworked the main menu.
– Adjusted the narrative text.
– Adjusted the icon positions (and they now include hover text).
Story / Interaction
– Added new chat dialogue for Phoebe, Tracy, Lisa and Elma.
– Added one new corruption checkpoint for Phoebe (with dialogue).
– Added new renders for Tracy’s scene.
– Removed Tracy’s second scene (to be improved for a future update).
– Removed Brittany and Katie’s interactions (to be improved for a future update).
– Katie’s encounter is still included and should also be working properly.
Gameplay / Mechanics
– You must now sleep to advance to the next day.
– You cannot sleep until it is night time.
– Bedroom actions can only be done once a day, and will advance time once.
– Bedroom actions cannot be done at night.
– Teaching and occult research can only be done once a day, in the morning, and will advance time twice.
– Teaching and occult research cannot be done at night.
– Phoebe and Tracy’s rooms are inaccessible at night.
– The school is inaccessible at night.
– The game should no longer lock up upon reaching maximum corruption.
– Phoebe’s conditions for peeking should now work properly.
– Tracy’s interaction in the bathroom should now work properly.
– Tracy should no longer disappear after corrupting and talking to her in the kitchen.