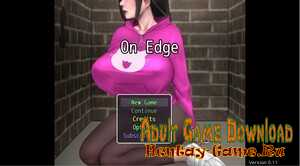 Info: On Edge is an adult game where you play as Debbie, a talented young biologist who, despite her youth, is already somewhat famous for making advances towards solving Eleria's famine problem. For her final assignment, she decides to travel back to the village she grew up in, and find out what went wrong. However, a mysterious package awaits at her door... it looks alien, but what does it do?
We are in Eleria, a planet in another universe with striking similarities to Earth. Eleria was prosperous, however, at some point in time, animal reproduction ceased, causing famine to befall the entire planet.
Soon after that, famine was seemingly solved by an unknown benefactor. Rumours started spreading about huge factories of unknown origin, and noone knew how they really operated. Each factory required just one person to operate, and that person was selected by the factory itself. In the beggining, it was seen as great honor to be selected and to accept the invitation. However, the workers were constantly threatened and manipulated by the powers that be, as political games ran rampant about who will control the food flow.
Thus, it was made illegal, and deemed greatly dishonorable, to ever reveal that you are a worker at a factory, since you were meant to have no bias towards who would get the food.

v0.2.5
Market Area added (Destroyed & Repaired variations)
Created the milk stall image handling system
Scenes added:
market repair scene
3x milkstall scenes
1x repeat milkstall scene
2x supafrinz scenes (1 short and 1 longer)
Reworked the image showing system so that it doesn't misplace images (that's a huge subject but I'm summarizing it here)
Made the image loading to wait until most (if not all) images are loaded (so that it doesn't show images one by one)
Lowered the cache limit to avoid freezes
Added cheats and made them available to everyone (for now) (Config -> cheats)
Fixed a ton of bugs (as always, some may leak)
Added a modding system (tutorial in-game in Config) for gloryhole clothing
Altered the window skin
Altered the window to display 3 lines of text but cover the entire width of the screen
Added SFX in by Pixie Willow (currently mostly at the milk-stall scenes, more to come!)
Worked on many things in the background for the future (as shown in progress reports)