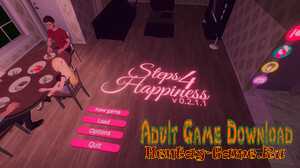 Info: The story focuses on four characters, an 18-year-old guy, his father, his father's girlfriend, and the stepdaughter of the father's girlfriend's previous marriage, all living in the same house. During the game, the player will switch between the four characters and will have to choose their lines and actions. Each interaction between the characters generates feelings that are expressed in their faces. The balance between these feelings generates the happiness of each character. The good ending will depend on the happiness of the four.​