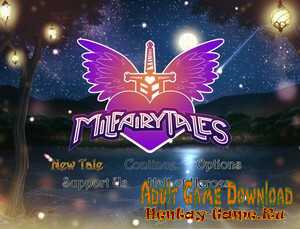 Info: Follow our hero-in-training (Default: Mark), in his quest to master his family sword-style. He is the son of the legendary heroine, who once saved the world from chaos. His mother's fighting style draws powers from one's inner sex drive, but she thinks she can't fully teach him all the principles. So he will have to learn even more from his foxy masters, on how to turn his sexual tension into power! Yet, little does he know that his journey will be the beginning of something much greater and that the land might be in need of another legendary hero soon enough. Join him and his colorful party of sexy Milfs on a magical journey through Milfairy! A fantastic land of many mysteries, protected by the Goddess of absolute love!
Expect a mixture of a traditional JRPG, with combat, dungeon exploration, dating and sex games with the girls from Milfairy! Embark in a story that will join two unlikely star-crossed lovers in a quest to save their world once more and for all!​