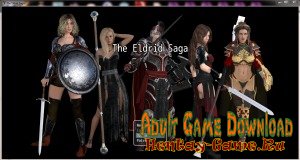 Info:
Story.
The game follows a young man who enjoys playing MMORPGs one day he wakes up to find he has a beta invite for a new game. Deciding to try the game out he is electrocuted during a lightning storm and finds himself teleported into the game world where he embarks on a quest to stop an evil demon lord. Throughout his quest he travels to different lands ranging from the frozen north inhabited by a viking like tribe to the woods of the elves before finally making his way through a demonic wasteland to finish his quest.

The game is called The Eldrid Sage and it is a JRPG style game with some MMORPG elements with 3DCG scenes. The game has a large collection of weapons and armor, currently 648 weapons and 677 pieces of armor. They are split into 6 tiers with common, uncommon, rare and epic variants with possibly legendary added later. I will also be adding in MMO style dungeons were you fight multiple bosses all providing a fun challenge(hopefully) and will drop epic gear. The player will be able to recruit 14 players into their party and will improve their relationship with them unlocking sex scenes as well as unique companion skills. You will be able to take on side quest on your journey through the large game world. As well as having scenes with the members of your party there will be scenes with people you meet throughout the game.

Changelog Version 0.15:
Here is the first major release of the game. Everything seems to be working as intended.
A few points to make when you do the dungeon. There is a chest outside containing rare weapons(you would of probably checked it anyway). Secondly once you have killed the final boss you should be able to reset the bosses by leaving and entering. You can’t reset it before the last boss is dead.
I’ve added a teleport room in the players castle that once unlocked will allow you to fast travel. If you are playing from a saved game you will need to go back and get them.