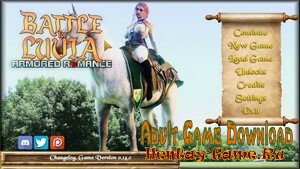 Info: You play the role of Sir Patrik of Akros, a charismatic, handsome and middle aged (for the times) Knight that set by bonds of loyalty and family to the new Countess of Kathia, is bound to gather the fealty of the vassals of his liege, cajole with the outer counts, and overthrow the Duke of Luvia. It will not be only a path of conflict, choices of whom to trust and whom to make a head short, but will let the player enjoy the power fantasy of the Middle Ages, using the lesser and being used by the higher, both for power and for pleasure. In your treacherous journey among medieval politics, nothing will stop you from romancing and lay with any woman that is put in your way, for lust, love or political interest. Not only nothing stops you: Is part of your mission.​

1. For those who want to know before hand , playtime (mainstory, side stories, and side minor romances) is from 3 to 4 hours for a single run. (It has multiple branching paths of higher or lesser consequences, also different options to take about the war management part of the game that doesn't have still an impact until Chapter 3). The important choices present in Chapter One are not branching the end of the game, but the way you go to there)
About game engine:
1-The game includes two fast modes and a hands free mode, they are welcomed due replayability. (I'll add a text speed control in the next update to fit the hands free mode to your needs).
2-You will have to forgive me for the unability to save the game during cutscenes, but that is mostly a problem just for the prologue, due to being linear and a bit lengthy. Game autosaves and let you manually in some points of it tho.. Beyond the Prologue, you are in "freeroam mode" and you will always have lots of chances to save, and non-important cutscenes are not long.

0.19.d1
Game Engine Changes:
-Vram fixes to allow Hartlepool, Pirate Cove & Remember Scenes to be playable on older graphics cards.
-Integration of new video-based animations instead of unity-frame animations (This have four effects, integration of more specific sounds for every animation, lower vram consumption, lower HD space consumption, and as I replace older animation with videos, lower general vram consumption for all the game, as well as longer frame animations on the animations yet to be remastered).
-Big UI reshape, closer to the final looks of the game. Also with the start of the Tooltip system. Now options will show a tooltip explaining what they do, but only a few are active right now (testing). New Romance Menu and Camp Hub worked on but not included yet for various reasons (Like release speed, will be active on 0.20).
Story Content:
20+ new long frame animations
200+ new stills
600+ new dialogue lines
4 old and new girls to advance in.
While the goal of the update was performance, This update includes:
-An Alternative Reality story based on some weeks before the arrival of Sir Patrik to Hartlepool about an old friend of us.
-A new ingame (hidden) quest with choices, conflict, with two new girls fun.
-The Old Tower conclusions.
It is a small update on content but longer than other small updates and fun-content packed.