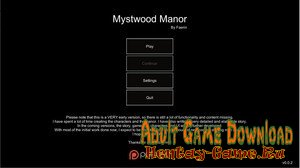 Info: In ancient woods the realms collide and thus the veil wears thin,
Spirits dwell and dreams shall haunt all those who stay within.
So take great heed and turn away when myst devours your sight,
Lest you get caught and forevermore lie trapped in endless night.​

v0.4.2.8
Story
• Added all tier 1 events and reward outfits for Anikka.
• Added all tier 2 events and reward outfits for Anikka.
• Added the last tier 2 event and reward outfits for Kay.
• Added the first tier 3 event for Kay.
• Added a new dialog for lady Emily.
• Added the first part of a new dialog for Richard.
Gameplay/UI
• Implemented a new videoplayer, this should fix any video issues on both Windows 7 and Windows 10.
• Increased (corrected) the level requirements for claiming tier rewards.
• The activity screen now shows an icon of the current room of staff members and guests.
• Updated the inventory screen to show all available items and cards currently in the game as well as which character is using them.
• Isabella know let’s you know when you have completed a tier.
• Added a skip button to the results screen to fast forward through.
Bugfixes
• Fixed a bug sometimes causing freezes when an event occurred.
• Fixed a bug with the dialog ID’s for Julia, causing some work scenes not to show up when they should.
• The settings.ini file is now created automatically if it does not exist.
• Fixed the Spanish translation.
• Fixed a bug causing Isabella to not show you any new cards, even when you didn’t have all of them yet.
• Fixed the ordering for the prev/next buttons for gallery images.
• Fixed a bug causing the cook card to not give any bonus.
• Fixed a bug causing a freeze/crash when a security event triggered in a closed down room.