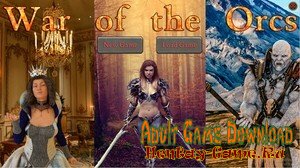 Info: The Player plays as an Orc anti-hero who must accomplish a feat of strength to become the new Orc Chieftain, this involves starting a war with the enemy humans and capturing their princess.​

Version 1.0.4:
Adventure Map: The main game-play now takes place on an adventure map, HOMM3 style. The player can explore, fight monsters, find treasures, resources, artifacts, capture resource nodes, etc. There are also quests and in some cases you may find damsels in distress around the map.
Building System: A building system has been added. The Player can build up a base and different kinds of buildings. Some buildings allow the recruitment of creatures, while others serve other special purposes.
Combat System: There was some significant rework of the combat system to improve stability and performance. - Many bugs were squashed in this process.
New Creatures: There are quite a few new creatures added including an entire faction of Amazons and many others that you'll see scattered around the map. The creatures have their own special abilities etc.
Turn based system: A turn based system has been implemented in the adventure map as well. Recruitment buildings refresh their populations weekly, also, creatures on the map will have their populations grow as well, slow at first and faster over time.
Other changes:
Art assets have been changed to higher quality ones.
The adventure map was completely redone.
Most stories are new, while some parts of stories and the old lore is still present.
Additional renders have been done.
It is now possible to select what stat will be increased upon player leveling.
Most of the UI has been reworked and the dialogue system was completely redone.
Additional features such as the ability to sell unwanted artifacts have been added.
The game now autosaves both before and after combat and also at the beginning of each day. There's also a manual save in the menu so the game can be saved at any time.
The game can be played start to finish, the win condition involves capturing all of the strategic resources.
The game has been almost entirely redone, and this version can be played all the way to the end.